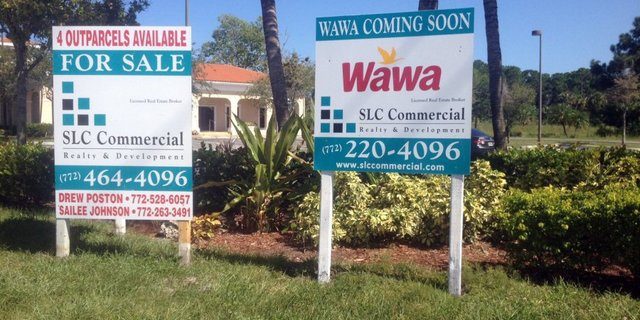 By Kelly Tyko of the TCPalm 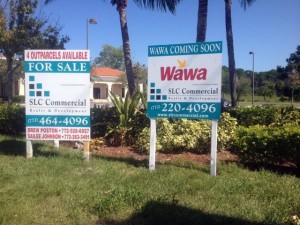 STUART — Wawa’s hoagies and coffee could be served soon in Stuart.

A sign with the Wawa goose logo that says “WAWA COMING SOON” has been posted at the southeast corner of Kanner Highway and Monterey Road.

Representatives for the Pennsylvania-based gas station chain have submitted plans to the city to build a 6,000-square-foot convenience store with 16 gas pumps where a vacant, former PNC Bank still stands.

This is the second proposed Wawa in Martin County, which made its Florida debut in July 2012.

In July, Martin County planners had a pre-application meeting with developers interested in building a movie theater and a Wawa at Kanner Highway and Lost River Road, just east of Interstate 95 and near the Cracker Barrel restaurant.

However, formal plans have yet to been filed for the Wawa and since the July 10 meeting, DeLand-based EPIC Theatres signed a contract to buy approximately 10 acres on the south side of Kanner Highway, just west of the interstate.

Plans for a Stuart Wawa are further along than the western Martin County possibility, which is about 4.8 miles away.

Reetz said the site needs to be rezoned to a commercial planned-unit development, which he estimates could go before the City Commission for approval around November. The old bank building will be torn down as part of the plan.

And even though the rezoning process could be approved by the end of the year, Wawa fans will have to wait more than a year before getting a soft pretzel.

“Because it’s a franchise, they have to get on a waiting list so the construction wouldn’t start until 2016,” Reetz said.

Since SLC Commercial posted the Wawa sign last week, the local commercial real estate firm has been getting two to three calls a day from residents excited about Wawa, said Drew Poston, vice president and a broker with SLC Commercial.

“We sold the property to the developer and we are representing the developer in trying to find users for the balance of the land,” Poston said. “We’re talking to some other retailers but Wawa has some restrictions on what they will allow to go there.”

Wawa officials were unavailable for comment and previously told Scripps Treasure Coast Newspapers that they typically do not announce new store locations until construction has begun and all permits are obtained.

Coffee: Wawa brews more than 195 million cups of coffee each year using its own special blends and a variety of flavors. Other beverages include iced and hot lattes, cappuccinos, macchiatos, chai tea, frozen cappuccinos and smoothies.

Hoagies and food: Hoagies are the most popular food item and Wawa makes more than 60 million built-to-order hoagies each year with specialties including meatball and cheesesteak. Wawa also has soups, sides, salads, wraps and ready-to-go foods.

Touch-screen ordering: You place your customized sandwich order on a touch-screen menu at the deli counter.

SLC Commercial still has Treasure Coast vision and beyond
May 1, 2018