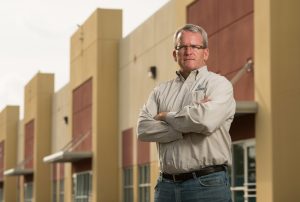 “We have seen a steady increase in demand for space,” said Chamberlin, broker and president, SLC Commercial. “That’s put upward pressure on pricing, which should continue this year. It’s a very healthy market, and this should be a good year for sellers and landlords.”

Chamberlin’s forecast is based on 25 years of experience in the Treasure Coast commercial market. He formed SLC Commercial in the early 1990s, and has assisted buyers and sellers with transactions throughout the region, into Palm Beach and Broward to the south, and Brevard and Orange counties to the north.

Today, the Stuart-based regional firm has three support staff at its headquarters and 10 full-time salespeople in Stuart, a satellite office in Port St. Lucie and an affiliate in Vero Beach.

“Our Treasure Coast commercial market tends to be very local,” Chamberlin said. “We don’t get a large influx of outside investors from the U.S. or international locations. More typically, an entrepreneur or professional from the Northeast who already has a second home in our area will open a business here. That’s been the primary driver for our office market.”

While the region’s office sector was relatively quiet in 2015, there was growing activity in the retail and industrial sectors, according to Chamberlin. Grocery stores, coffee shops, gas stations and fast-food restaurants are among the retailers looking for high-traffic locations throughout the area.

“We have seen large national retailers return to the Treasure Coast,” Chamberlin said. “It’s not just the brands that exited during the recession. Demand is coming from new retailers like Aldi, Wawa and RaceTrac convenience stores. In fact, we have several income-producing shopping centers under contract at sale prices in the $2 million to $4 million range. Anything that produces income is hot these days.”

In December, SLC Commercial handled the sale of a 4.5-acre commercial property on U.S. 1 in Stuart to Konover South. The real estate company purchased the site for more than $2 million and plans a 30,000-square-foot retail development, Chamberlin said.

The region’s industrial sector is also springing back to life.

“We had been heavily overbuilt since the mid-2000s and vacancy rates in some parks were in the 50 percent range,” Chamberlin said. “Now, we’re moving back to more traditional vacancy levels, particularly in Martin County. We have also seen a considerable improvement in marine and aviation manufacturing, which has increased demand for additional industrial space.”

In contrast, the Treasure Coast’s hospitality and healthcare markets are fairly slow this winter. There was a surge in hotel construction, even when the regional economy was struggling, and currently there is little demand for more space, Chamberlin said.

Demand for medical offices and healthcare facilities is also slow at the moment, except for locations near Tradition Medical Center in western Port St. Lucie. However, SLC Commercial recently sold a 30,000-square-foot office building in Palm City to the Visiting Nurse Association (VNA) of Florida. It will be an 88-bed assisted living facility for the VNA, which has existing facilities in Okeechobee and Jensen Beach, Chamberlin said.

Most new commercial construction involves renovation of existing facilities or new build-to-suit projects for owners or tenants, according to Chamberlin.

“We are not seeing speculative projects yet, but that may occur later in the year. As demand picks up, we may see companies constructing large warehouses for their own use, and leasing out the additional space,” Chamberlin said. “That’s a sign of how much our market has come back in the past year.”